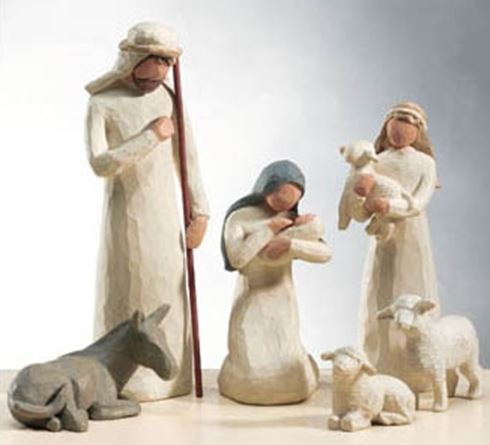 The word nativity is associated with the birth of Jesus Christ. Therefore, the nativity scene, commonly seen at Christmas time, depicts what it looked like when He was born in a manger in a stable in Bethlehem. K. Kannon offers hand carved willow tree figures of the nativity scene.

The nativity scene serves as a visual reminder to people about the birth of Christ. Scriptures tell us that God told Mary she’d have a baby, Jesus, who would be the Savior of the world. She and her husband-to-be, Joseph, travelled to Bethlehem because Joseph had to be in his tribal hometown for the Roman census taking place. Bethlehem was crowded, to the point where there wasn’t even room at an inn for the couple. They ended up, essentially, in a barn stable where Jesus was born, wrapped in swaddling clothes, and placed in a manger– a feeding trough!

Why are there animals in the nativity scene? At the time, homes were generally two levels– upstairs for the people and downstairs for their livestock. Therefore, a home’s barn/stable area might have ox or donkeys kept there.

News of this birth spread, such that three wise men (the “Magi”) and their camels came to honor the newborn King. Shepherds also appeared at the scene, too.

History of the Nativity Scene

The nativity scene as we know it today actually got its start by St. Francis of Assisi, who created the first live nativity scene in the year 1223. He did it to show people what the birth of Christ would have looked like way back when. Since then, people have participated in living nativity scenes with people dressed up as the various characters as well as live animals brought into the scene. It’s not unusual for churches today to stage this scene with real people and animals and/or have statues representing the whole thing displayed on church grounds at Christmastime.

Would you like to see the different figures/figurines that K. Kannon offers regarding the nativity scene? If so, click here to check out what K Kannon has in stock. In particular, look for the Willow Tree 6 piece set which includes Joseph holding a staff, Mary cradling baby Jesus, a young girl holding a lamb, two sheep and a young foal.