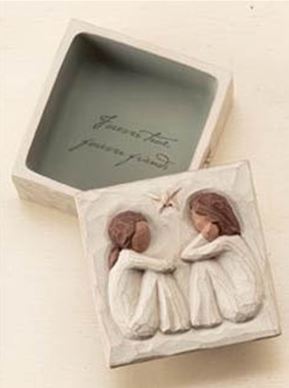 The necklace was beautiful. It had a heart-shaped locket. When you opened it up, you saw the picture of mother and daughter together, smiling. Mother would wear the necklace, a gift from her daughter on her 42nd birthday, only on special occasions, like birthdays, anniversaries, and wedding days. Indeed, when daughter was in her twenties, she decided to marry the man she loved, and weeks later, sure enough, mother had that necklace around her neck at the wedding ceremony. Daughter always knew where to find the precious necklace and locket when she visited mother– she kept it in a unique keepsake box atop her dresser in the bedroom. “This is my special box for safekeeping,” she’d say.

As the years went by, mother and daughter spent many good times together, along with daughter’s husband, and, eventually, two kids… and a dog. It was a happy family. Then, mother became old and feeble. Her sickness got worse. Eventually, she passed away.

Daughter was in charge of figuring out what to do about mother’s things. She gave most of her mother’s possessions away, save for that necklace in its keepsake box. Proudly, she placed it upon her own bedroom dresser, where her own daughter would also curiously ask, “What’s that?” That keepsake box almost seemed magical to those who encountered it, for in it was a lifetime of memories.

On certain days, when the mood hit her, daughter would open the keepsake box and stare at the locket’s picture. She would cry when she put the necklace on every once in a while. Sometimes they were tears of sadness, missing mother, and other times they were tears of joy, thinking of mother in heaven. Someday she’d give her own daughter this heirloom.

Keepsake boxes often hold people’s treasured memories. These things may be jewelry, written notes, coins, or small collectible items. Whatever’s in the box, it’s meaningful to the owner. And, chances are, it will be passed down, generation after generation.

Kannon Company is where mothers, daughters, and others go to find Willow Tree keepsake boxes.  Inside these beautiful boxes, they’ll find engraved sayings like “a boundless love.” Would you like to see the various keepsake boxes K. Kannon has for sale? Please visit here.

← Here’s Why You Should Add Willow Tree Plaques to Your Collection
Why Do Willow Tree Figurines Not Have Faces? →